These are the latest changes to the MusicBot. Please check this page after bot updates to see what has changed. To learn how to update your bot, see this page.

This release merges all changes from the review branch of MusicBot into the main branch. This contains multiple bug fixes, improvements, and changes. MusicBot requires Python 3.8 or higher.

Please note that MusicBot requires privileged intents to function. You need to enable each of the Gateway Intents on your Discord Application’s ‘Bot’ page. 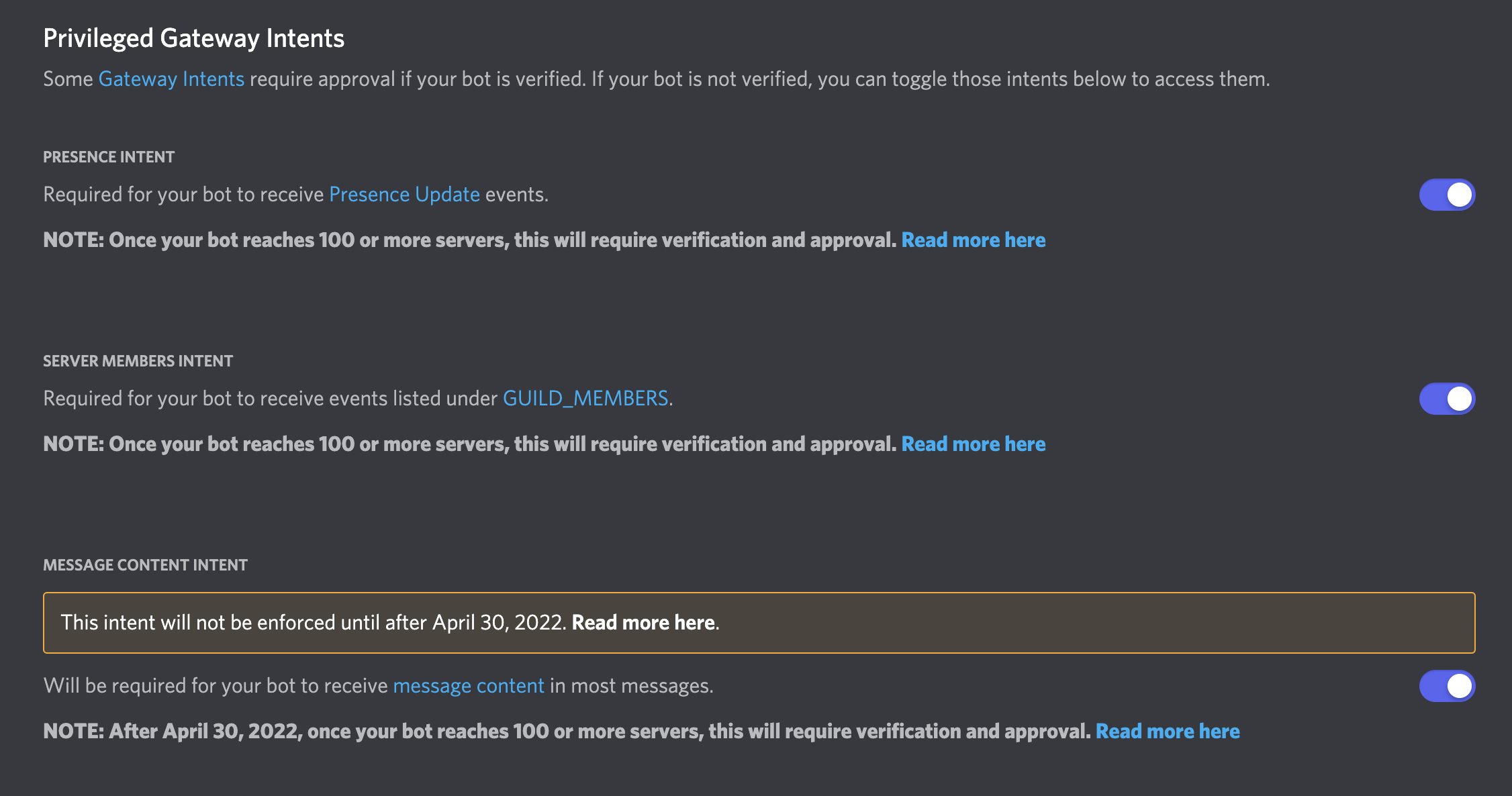 From now on, MusicBot versions will use the date of the release to the master branch (shown as release-DDMMYY when running the bot), and not an arbitrary version number. This change is because it makes it easier to see how old the version is that a user is using, and because the old versioning was fairly nonsensical.

Starting from version 1.9.8, MusicBot requires the rewrite version of discord.py. It can be installed using the update files included, or by running python3 -m pip install -U -r requirements.txt.

Translations have been contributed (thanks!):

The bot can now handle Spotify URIs, aka URIs that begin with spotify:. This can be used to add an album or playlist from Spotify to the bot, however, as streaming direct from Spotify is against their Terms of Service, the bot tries to find the nearest match for the song(s) on YouTube instead.

This is a small update to address some issues.

This version, and future versions of the bot, will require you to use Git to install the bot. This has been done so that people can’t download the ZIP file and then complain when the bot doesn’t work, or when people say that they followed a YouTube tutorial which is outdated by like a year. Our official guides go through the steps of installing Git, and if you don’t bother following them, we’re not going to help you.

Trust me, using Git is a lot better idea than downloading a ZIP, as easy as it sounds, because otherwise your process of updating the bot will be made much harder and long-winded. If you’ve already installed the bot properly, great! You can update easily by looking at this page.

This is a courtesy release to merge commits from the review branch into master that have been on that branch for a long time. There are a lot of things that have changed code-wise, but the end user functionality generally remains the same.

For a definitive list of changes, view the commits.

With this release, a LICENSE file has been added to the repo. While we’ve always stated that this bot as being under the MIT license, we’ve now made this known properly.

Please avoid downloading the ZIP of this release unless absolutely necessary. Follow the guides on the wiki to learn how to install the bot instead, or if you’ve already installed it, update the bot.

Small update to address a few issues. I was going to release this with the next major update but i’m going to push this much now to fix a few things.

Assorted fixes and minor updates and such.